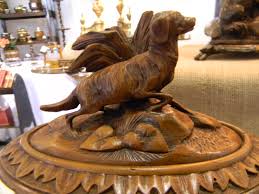 Indonesia is a country rich of art and culture which are intertwined with religion and age-old traditions. It is evident in the thousand cultures of each different ethnic inhabiting this archipelago. Religion and belief has strong influence on the community and it is obvious from island to island. It is vividly seen in each piece of wooden craft that has its own story. These beautiful and elegant carvings of people and animals will grace any home. Deep colors of wood comprise an ideal medium for the portrayal of traditional patterns and carvings that have been passed down through the ages. Wood is crafted with loving care by people and community who have an affinity with the creatures they represent and the traditions they follow in doing so. Woodworking has been practiced by many people in Indonesia for a long time, and the skills passed on from one generation to the next. This craft started from necessity and opportunity, as ancient people use the resources around them to make useful things for their society. The items Carving Beauties out of the Forest produced can be in the form of utensils for kitchens in their home or statuettes for their religious ceremonies. Several production centers that are famous for its wooden crafts are also the most important tourism area, e.g. Bali, Central Java, East Java, North Sumatra, South Sulawesi, Papua and Nusa Tenggara. The coexistence of craftsmanship and tourism is not a coincidence.

Those areas are home to some of the most unique and creative people in the country and also the location of some of the most scenic spots. With tourists flooding in, the enterpreneurial spirit of the locals combines with their craftsmanship talent. The result is an array of fabulous crafts and products and a lucrative and thriving industry. Indonesian wooden craft may depicts Indonesian history. Throughout its history, Indonesia receive influences from many cultures, including the Chinese, Japanese, Western Christians, Arab Muslims, and Indian Hindus and Buddhists. All of this is portrayed in their wood carvings of deities such as Vishnu, Buddha and art forms such as the Chinese and Japanese masks, carvings of ferocious winged dragons and also Arabic calligraphy. With the arrival of European influences, wood carving started to develop along more innovative and commercial lines. Indonesian craftsmen started to make much more figures in modern style such as children toys, chest, complete set of tableware and many more. Technology, as well as social development, has been instrumental in changing the market and inducing creativity. In the distant past, woodworkers used to rely on woods native to their region, until transportation and trade innovations made more exotic woods available to the craftsmen, enabling new designs and opportunities. Wood is an abundant resource in Indonesia, the home to one of the largest tropical forest in the world. The variety is immense, the quality superb. Local craftsmen will use the wood around them to create goods or artistic masterpieces. Royals and rich patrons of arts would buy those masterpieces, while common people buy ordinary goods to help them with their daily lives. With an ever richer society, functional goods like kitchen utensils and cutleries become more decorated and elegant.

With the help of technology and globalization, craftsmen now have varying material at their disposal. With their highly creative mind, the potential is limitless. On the demand side, buyers from all over the world now can also enjoy the beauty of these spectacular works of art. Tourists and merchandisers flock to production centers to buy those goods. Statistical data shows that the export of statuettes and other ornament of woods was more than half a billion US dollar annually. Other wooden items, e.g. wooden frames and casket and similar items, have similar export value. For all of those items, Indonesia is the leading world supplier. Today, this wooden craft industry is worth billions of dollar annually and employs workers in the hundreds of thousand. Most of the producers are small and medium-sized businesses that are spread all over the country, but mostly in the rural areas. The goods are sold through retail and wholesale outlets in the cities and major tourism and travel spots. Though in the beginning craftsmen carved wood to make ancestral idols for worships, the craft has developed to become a fully mature commercial industry. In addition to satisfying local markets, the products have been exported to many countries in the value of millions of dollar annually, creating prosperity along the way.