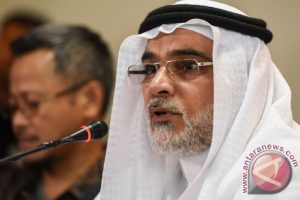 Jakarta (ANTARA News) – Saudi Arabian Ambassador to Indonesia Osama bin Mohammed Abdullah Al Shuaibi provides his views and his evaluation on relationships and the cooperation of Saudi Arabia and Indonesia a year after King Salman’s visit to Indonesia early last March. Ambassador Osama said the two countries have the potential to improve relations and cooperation in various agreements that have been made. The Central Executive Board of the Al-Irsyad Society presented Ambassador Osama in the discussion limited-themed “Relationship and Cooperation Indonesia-Saudi Arabia, A Year After The visit of King Salman to Indonesia “in Jakarta and attended among others by the Chairman DPP Association of Al Irsyad dr. Basyir Syawie, Director of Middle East Affairs at the Ministry Foreign Affairs Sunarko, Head of Middle Eastern Studies Program University of Indonesia M. Luthfie Zuhdi PhD and Vice Chairman of Kadin Middle East and OIC Affairs, Mohamad Bawazier. “The officials of both countries follow up on the agreements reached at the time visit King Salman to Indonesia and meet with President Joko Widodo, “said Ambassador Osama. According to him, Indonesia has rich natural resources and many, and has an appeal to Saudi Arabian entrepreneurs to invest and tourists for a vacation.

Cooking spices and groceries
After graduating from a series of tests conducted by Saudi Food and Drug Authority (SFDA) Saudi Arabia and also by looking at potential food market opportunities and beverages in Saudi Arabia, PT Sasa as a major producer of cooking spices and ingredients Indonesian food in collaboration with Sami Alkhatiri Est as a partner company local Saudi Arabia is ready to build a factory in Saudi Arabia to meet demand
markets in the Middle East region. PT Sasa Inti and the Economic and Trade Team of Consulate General of Jeddah promoted and undertook a series of “Business to Business:” meetings with buyers, Food festivals and Indonesian drink that was held at the Pesta Rakyat at Wisma KJRI Jeddah as well a series of cooking demos with Sasa products in several tourist areas in Saudi Arabia. Consul General R.I Jeddah, M Hery Saripudin said that all citizens Indonesians living in Saudi Arabia are the ambassadors of Indonesian product promotion including Consul General R.I Jeddah, M Hery Saripudin said that all citizens Indonesians living in Saudi Arabia are the ambassadors of Indonesian product promotion including products from Sasa. Economic and Trade Team of Consulate General of Jeddah as the driving force in boosting Indonesia’s non-oil exports to Saudi Arabia’s efforts with the rest potential by working hard to promote Sasa products to be accepted by the people of Saudi Arabia. The key to successful promotions is by doing a more intensive and effective approach to all Indonesian citizens as well as the Indonesian diaspora working at Saudi Arabia. The number of Indonesian citizens who perform the Hajj and Umrah and the mukimin living in Saudi Arabia is a potential market or captive market for products Indonesia especially food and beverage products. In addition to the existing markets, Saudi Arabian society is very much about Indonesia well and consider Indonesia as the second home for the citizens of Saudi Arabia,
so it is not excessive if the Arab community is very familiar with everything  related to Indonesia.
This is an opportunity for the Economy and Trade Team of the Consulate General of Jeddah for continues to explore food innovations from Indonesia to continue to be promoted in Saudi Arabia market. The people of Saudi Arabia are very familiar with meatballs, sate, fried rice, rendang  so that in the last five years many emerging or adding branches of Indonesian restaurants in Saudi Arabia such as the opening of Mang Oedin’s Meatball restaurant in front of Al Rahmah Floating Mosque, Opening Wong Solo Restaurant in Balad Jeddah, the opening of Mr Sate’s Restaurant in Syarafiah Jeddah area and branch opening Batavia restaurant in the city of Medina. Gunawan added that the Group of food and beverage commodities is one of 10 potential commodities entering Saudi Arabia market. Main commodities and other potential commodities namely automotive, palm products, fish and fish processing, rubber products and rubber processing (including tire / tire), plywood / plywood, pulp and paper, textile and textile products, furniture, home d? cast and building materials have also been long
flooding Saudi Arabia market. To attract Saudi citizens to come to Indonesia, the managers of travel agencies offers tour packages “napak tilas” Raja Salman journey from Jakarta to Bali. “The number of Saudi citizens visiting Indonesia is increasing and so are the frequencies flights and their length of stay here, “Sunarko said.