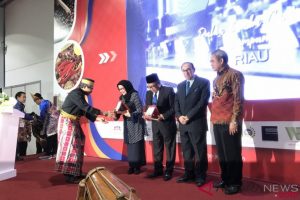 Jeddah (ANTARA News) – The exhibition of home-based products named Made in Indonesia Expo 2018 in Jeddah was officially opened by the Consul General of the Republic of Indonesia Jeddah Mohamad Hery Saripudin, where hundreds of visitors attended the event. “I feel happy and proud, because together with my brothers from Indonesia and Saudi Arabia, we are witnesses of one of the important points in the history of relations between Indonesia and Saudi Arabia,” Hery said during a speech in Jeddah on Wednesday. Hery explained, since decades, Indonesia has not held a single exhibition in order to introduce the potential of Indonesian trade, tourism, investment and professional labor to the public of Saudi Arabia. In fact, Saudi Arabia is a captive market for Indonesian products because Indonesia is the largest sending country of pilgrims in the world with more than 221 thousand pilgrims and more than 1.2 million umroh worshipers per year. Thus, Indonesian products related to catering, accommodation and transportation needs are urgently needed. This can be seen from the achievement of the performance of Indonesia’s non-oil and gas exports to Saudi Arabia at the end of 2017 reaching 1.38 billion US dollars, up 3 percent compared to the same period in 2016 which was 1.33 billion US dollars. Through the exhibition, he continued, the Indonesian Consulate General in Jeddah cooperated with Kadin Jeddah and was supported by PT Wahyu Promo Citra, carried out promotional activities that were oriented to market needs efficiently and effectively. Therefore, the Indonesia Expo Jeddah activity is a golden opportunity for Indonesian entrepreneurs to be able to penetrate and expand the market of Indonesian products to Saudi Arabia as well as the Middle East market. “Let’s take advantage of this golden opportunity to increase trade transactions to Saudi Arabia,” he said.