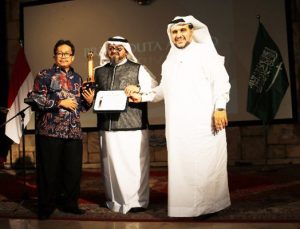 Anugerah Primaduta and Duta Niaga Award on Monday night (11/12) in the Consulate General’s residence was very special because the trophy was paraded from Wisma Konsul Jenderal RI Jeddah, Saudi Arabia to Balai Nusantara like a panganten mapag ,a Sundanese culture.

Information from KJRI Jeddah received by Antara in Jakarta on Tuesday (12/12) mentioned that this Primaduta Cup Mapag Parade is accompanied by a stepped down dance complete with abuh sareng ambu witnessed by more than 150 invited guests consisting of representatives of Indonesian citizens working in international institutions, Saudi businessmen , Jeddah Chamber of Commerce and Industry (JCCI), journalists in Saudi Arabia and employees of the Consulate General of the Republic of Indonesia inJeddah.

The highlight of this year’s Primaduta and Duta Niaga Awards is a series of “The Annual Gathering on Economic and Trade 2017” activities centered at Balai Nusantara KJRI Jeddah. At this event a variety of culinary Indonesia served to the invitation that most of the entrepreneurs from Saudi Arabia.

Primaduta is the highest award of the Government of Indonesia (Ministry of Trade) given to loyal importer companies or loyal to import Indonesian products for a minimum period of five years.

In addition, this importer company also continues to increase the number and types of goods imported from Indonesia, can provide added value and also continue to actively promote Indonesian products abroad.

Saudi Arabian importer companies that received the award of Primaduta namely Abdul Latif Jamil for manufacturing industry category and Said Bawazer Trading Company (SBTC) for the category of food and beverage industry. The two Primaduta trophies were handed over by President Joko Widodo to the Indonesian Consul General in Jeddah M Hery Saripudin at the 32nd Trade Expo Indonesia in BSD City, Banten on October 11, 2017.

Consul General R.I Jeddah, M Hery Saripudin said that since the last two years the ceremony of Primaduta and Duta Niaga conferences became a tradition of the Consulate General of Jeddah to appreciate and improve the cooperation of the economy and trade between the two countries.

Vice Chairman of Jeddah Chamber of Commerce and Industry, Ziyad Bassal al Bassam also expressed his gratitude to Indonesia who has built and established close relationship so far.

Ziyad further said that this relationship needs to be improved not only on economic and trade relations, but also relationships in various sectors including investment, tourism and other sectors.

Based on trade statistics compiled by the Ministry of Trade, the total trade between Indonesia – Saudi Arabia from January to September 2017 reached 3.33 billion US dollars, up 9.64 percent compared to the same period in 2016 reached 3.04 billion dollars.

In the non-oil and gas trade sector Indonesia’s trade balance increased 6.53 percent from 1.552 billion dollars during January-September 2016 to 1.653 billion dollars in the same period in 2017.

Head of ITPC Jeddah Gunawan member of Economic and Trade Team of Consulate General of Jeddah added specifically for non-oil and gas exports, export value to Saudi Arabia until September 2017 has reached 1.079 billion dollars or increased 5.58 percent over the same period in 2016 with a value of 1.022 billion dollars.

The atmosphere of Indonesia was presented at this event. Various culinary and Indonesian dishes such as fried rice, various satay, various cakes, rawis eggs, shrimp crackers, various fried onion, cucumber, tomato and Indonesian chilli as main menu, besides various drinks such as wedang ginger Sundanese, various snack market, meatball noodle and fruit ice that will shake the tongue of the invitees.

The awards ceremony of Primaduta and Duta Niaga is in addition to being used as a forum for hospitality between businessmen between the two countries, as well as the form of night promotion of “Wonderful Indonesia” tourism by playing a short video of destinations in Indonesia.